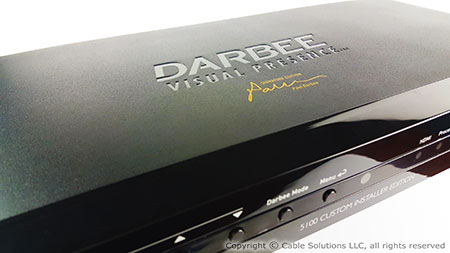 The Paul Darbee Signature Edition has never before been offered for sale to the public.  We only have two units available at the time of this writing, so it is fair to say that these units are very rare.  These are unused units.  Special care was taken to protect them from the front panel rub marks that troubled the non-signature units.  We opened one of them for inspection and it appeared to be in pristine condition.  These are probably the last new DVP-5100CIE units in existence, let alone Paul Darbee Signature Edition units.

There can never be another Paul Darbee Signature Edition, so this is more than a compelling video enhancer - it is also stands as a functional testament to the inventor of the Darbee Visual Presence technology.  What follows is a description of the non-Signature version, although they are identical, other than the signature imprints.

If you have been following DarbeeVision, you probably already know that this powerful human-vision-based model for digital image enhancement provides a sublime solution for improving the perceived depth and realism of images.

The processing is super fast, performed intra-frame so that there is no time delay, eliminating the lip-sync issues that are inherent with many video processors. Naturally, this makes the DVP-5100CIE great for watching videos and movies, but it also means that this is video enhancer is among an elite group that can also be used to enhance video games, where lag simply isn't acceptable!

The effect is so significant that some have commented that it rivals the realism of 4K Ultra HD displays using existing 1080p source material and displays.  More than that, the Custom Installer Edition can noticeably enhance virtually any resolution.  The DVP-5100CIE offer lots of options and adjustments, and it comes with a handy remote control, making it easy to fine tune right from your viewing position.

Devices to improve the appearance of video images have been around for as long as video itself.  Most of them had a noticeable effect, but unfortunately, the effect wasn't necessarily a good one.  With Darbee Visual Presence, that seems to have changed.  Hard-core video reviewers have become outspoken fans of the technology.  Some of them are the same people who, in the past, have gone out of their way to let their readers know that they had to turn off all of the video enhancement features that were built into the particular display device that they were reviewing, because it just made the picture worse.  But the DVP-5100CIE is different.  Everyone can see the difference, but more than that, most people agree that the resulting images look better.  People use adjectives like, immersive, deep, 3D, pop, detailed, sharp, revealing...always preceded by the word, "more".  The enhancement scheme is based upon human perceptual algorithms, so it is possible that some given individual will not perceive the change as being an improvement, but DarbeeVision's unusual satisfaction warranty does build confidence.  All one stands to lose is shipping costs, so why miss out on what could be the greatest thing since HDTV?

That's Visual Presence, but the DVP-5100CIE doesn't stop there.  This model adds an elegant rack-mountable cabinet that is right at home in even the most serious equipment rack.  All of the connection are on the rear panel, as they should be, leaving the front panel to convey stately elegance.  This Custom Installer Edition also includes phaseHD technology to ensure better HDMI connections, particularly with longer cable runs.  This model includes a USB port for easy firmware upgrades as well as an IR input port for installations where the front of the unit may not have line of site to the remote control.  In short, all of the performance that DarbeeVision has become famous for in a professional form factor.

To further sweeten the deal, we are including a DarbeeVision-Certified Kordz R.3 HDMI cable (6-foot)with every unit!

The DVP-5100CIE is made in the USA.  It comes with a remarkable 30-day 100 percent satisfaction guarantee, with 100 percent refund of purchase price (less shipping fees) if you are not satisfied with your purchase for any reason.  It also comes with ta one-year warranty against defects in materials and workmanship. If a defect is discovered, DarbeeVision will, at its option, repair or replace the product at no charge, provided it is returned during the warranty period, with transportation charges prepaid to DarbeeVision.

We also have a limited number of B-stock units available, but just to be clear, they are not Paul Darbee Signature Edition units!  The B-Stock units have minor cosmetic damage such as rub marks and scratches, but they are new, never used units, and that do come with the same warranty as new units.

Here is a close look at Paul's signature imprint on the front panel.

The back panel is shown here in this photo. 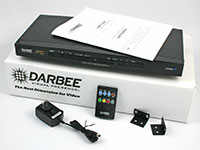 Here is what comes in the box - remote control, rack-mount ears, universal power supply, printed User Guide, the DVP-5100CIE unit itself, in the retail box. 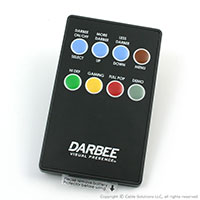 This is the included credit card sized remote control. 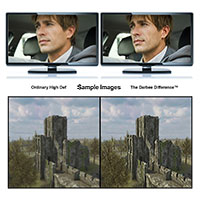 Click on this image comparison to get a closer look at what Darbee Visual Presence can do! 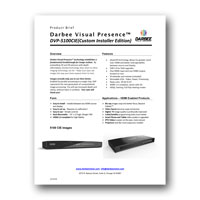 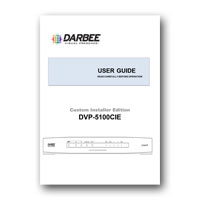 Here is the User Guide, in PDF format. 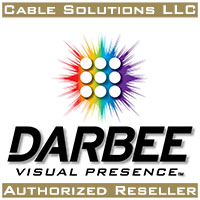 Superior service, high quality materials and meticulous workmanship...when combined, you get a superior product.  Don't get stuck with bad advice, slow shipment, inferior products or poor service.  If you want the best, you need look no further.